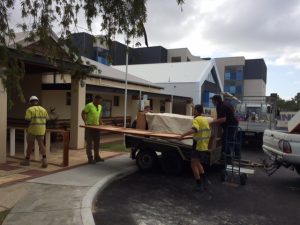 Sam of Community Connecting Youth collected shelving and curtains from Alchera Living to distribute to disadvantaged families. The shelving in particular will go to Kora Childcare in Bayswater.  The items came out of Alchera’s social centre which is currently being upgraded.

Community Connecting Youth advocate for and empower at risk young people to be responsible and positive members of a progressive Multicultural Community.

Sam Mesiti (CEO) has spent the past 28yrs working with young people and families ‘At Risk’. In 2007 Sam was offered the Youth Managers role at Outcare Inc. and spent the next nine years working with the Executive team in building a progressive, professional, and caring youth service. From humble beginnings, managing a team of two staff and two programs (2007) Sam and his staff built a committed Youth and Aboriginal Service team totalling 30 staff. Along with his team he developed and introduced award winning programs such as;