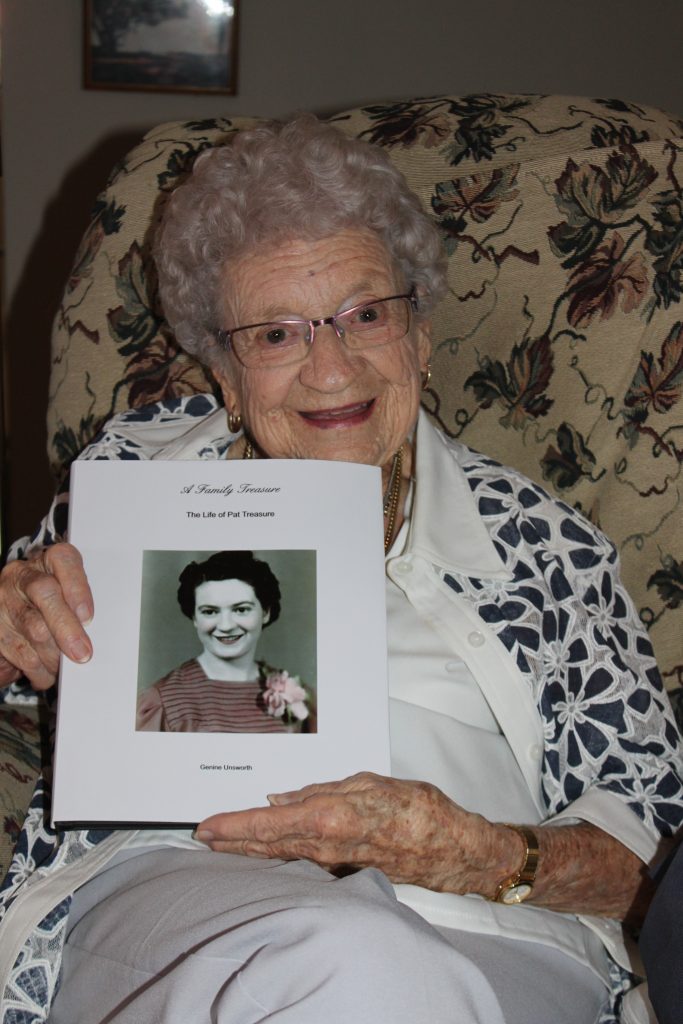 A gambling first husband who simply disappeared, a close encounter with Afghan Cameleers in WA’s Porphyry region, to clearing virgin bushland for farming in WA’s South West are just a few of the incredible stories documented in a new book that captures the life and times of 94-year-old Perth woman Pat Treasure.

A Family Treasure – The Life of Pat Treasure was written by former ABC broadcaster and Civil Marriage Celebrant Genine Unsworth as a way of preserving precious family memories for Pat’s daughters and other family members.

Since Ms Unsworth began recording Mrs Treasures tales and anecdotes on her mobile phone, the compilation of text, photographs, and other documents has been almost 12-months in the making.

Peppered with photos over four generations, hand-written recipes, poetry, a selection of her favourite personal belongings, and scanned original documents – including her father’s WW1 discharge papers –  A Family Treasure was published through Blurb Books with copies going to family members and close friends.

Ms Unsworth said Pat is a remarkable storyteller; “She made my job very easy. She has an incredibly sharp wit and still enjoys a glass of red wine every night with her dinner. Pat turns 95 in May, so there’s lots of fodder to choose from.”

Mrs Treasure’s father, Toby fought in the Australian Imperial Forces in World War I and she was raised mostly in Kalgoorlie and the Goldfields before spending much of her married life as an early farming pioneer on Richmond farm in WA’s south-west.

“It’s been a wonderful experience to be able to utilise my radio skills to record and self-publish Pat’s incredible story which will preserve her life story for younger family members including her many great-grandchildren,” Ms Unsworth said.

Her two daughters, Susan and Colleen, will be among a group of close family and friends who will attend a special book signing and launch at Mrs Treasure’s Willagee home on Thursday 22nd February 2018 at 2 pm.